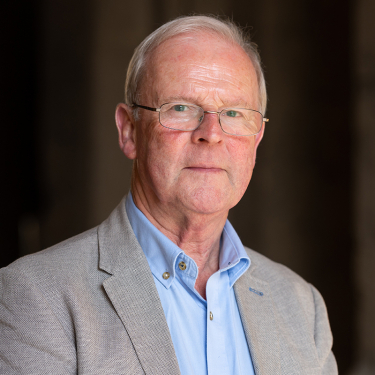 I was born in Belfast and educated first in Ireland, then in England. As an undergraduate at Exeter College, Oxford (1967-71) I studied French and German. As a postgraduate I undertook research into the narrative works of Charles Nodier (1780-1844) and completed my DPhil in 1976. Meanwhile I had come to Queen’s in October 1973 as a full-time Lecturer in French. I was elected a Fellow and Praelector in French in October 1977 and held this post until my retirement in 2016, when I was elected to an Emeritus Fellowship. As a Fellow and member of the Governing Body of Queen’s I contributed to College life in a variety of roles, including as Dean (1981), Tutor for Admissions (1985-90), Senior Tutor (1995-6), Estates Bursar (1996-2001), and Secretary of the Accommodation Strategy Committee (2003-8).

I became Professor of French in 1997, was appointed Officier dans l’Ordre des Palmes Académiques by the French government in 2005, and elected as a Fellow of the British Academy in 2009.

I taught French language and literature to all years. I had a special interest in translation (and published translations of Voltaire’s contes as well as of novels by Zola and Maupassant), and I taught translation from French into English to all years, as well as first-year grammar classes and some translation from English into French for first- and final-year students. I gave tutorials and seminars on a wide range of topics, authors, and genres across the whole span of French literature since 1715, in particular from the eighteenth and nineteenth centuries. My graduate supervision was focused on nineteenth-century French literature and culture.

My research career began with French Romanticism, and I published my first book on Stendhal’s novels. After that I went simultaneously backwards and forwards. My translation of Voltaire’s Candide first appeared in 1990, and this led to a comprehensive study of his contes and some years later to a full-scale biography. At the same time I developed a deep interest in the poetry of Stéphane Mallarmé (1842-1898): his work remained at the centre of my research for over two decades, and I published three books on him.

Since then I have been engaged in a wide-ranging study of nineteenth-century French poetry, focusing, under the project title of ‘The Poet as Lawgiver’, on how poets of the period envisaged the public function of poetry and their own public role(s) as poets. From 2009 to 2011, and thanks to the generosity of the Leverhulme Trust, I was enabled by a Leverhulme Major Research Fellowship to undertake full-time research into this topic. This led to the publication of my Unacknowledged Legislators in Post-Revolutionary France in 2016. Since my retirement as Fellow and Praelector in French I have been continuing work on this project with reference to Charles Baudelaire (1821-1867), and my recently completed book on him is due to be published in the bicentenary year of his birth.